August 25, 2019
If you were to choose the elements of a perfect place to live, you might be like a deer caught in headlights. Sometimes, you have to go somewhere else to see what there is to see, and know what there is to know before you could ever say, “This. This is where I want to live.”

Or maybe that’s just me. I’ve traveled many places, but I see the elements of what makes a good life here:

Safe, reliable, convenient, and clean public transportation. (Hello, beach day)
Small grocery stores on every couple of blocks. (Not a lot of processed foods, either)
Many green spaces. (I saw a guy standing on his head during one of my walks through the park)
An appreciation for the arts, making them affordable for everyone. (10 euro opera tickets)
Courtesy for other people. (I’ve seen people give up their seats for older women a few times)
Cafes where you can sit for hours without anyone batting an eye. (Sacher torte, anyone?)
And, there’s IKEA (accessible from public transportation, of course).

This is just scratching the surface of the culture. We’ve only been here one week.

As for our apartment, well, that’s even better. It has so much natural light that I’m sure my vitamin D level has skyrocketed. We have five skylights in our room and three large dormer windows in the living room/kitchen. They aren’t sash windows; they’re like doors that open inward. No screens. Just pure air. Very few insects, which makes eating al fresco truly delightful. There’s the circular staircase leading to the rooftop terrace, a large bathroom, and a small water closet with the teeny-tiniest sink I have ever seen. The bathroom has a large, deep tub, but there’s no shower curtain, though there’s a shower head. It gets a little wet. Heh.

There’s an elevator up here that requires a key to get to our floor. The entrance to the building is tile and stone, and it’s so old that the stone has worn spots from a century+ of people walking its hall. Next to our building is a bakery. On the other side is a cafe. Nearby is a church that rings the hour beginning at 6:00 am on weekdays, but somehow it’s charming here.

Here’s some of what we’ve been up to this week:

Dinner with some lovely new Austrian friends at a place Beethoven lived when he composed “Ode to Joy.” 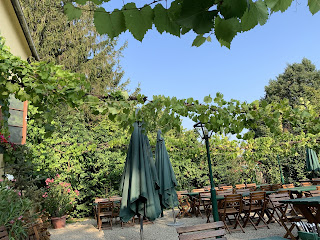 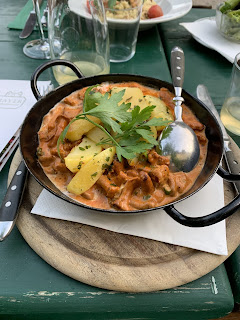 Chanterelles are in season, so I had chanterelle goulash. 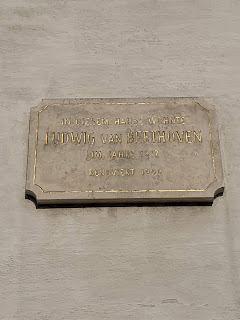 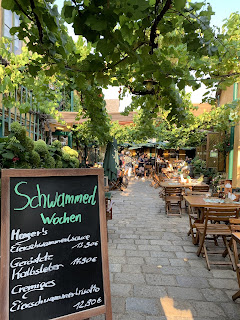 A visit to the Hofburg Palace, where there is a LOT of tableware. Also napkins that were having an identity crisis. (Am I a napkin or am I a flounder?) Apparently, there are only two people in the world who know the secret special napkin fold for the palace. 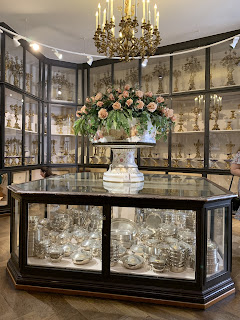 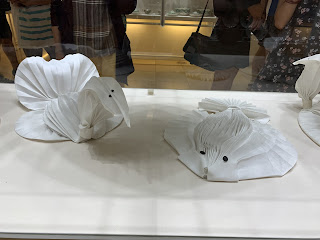 And, finally, a walk through the city this evening, with gelato of course 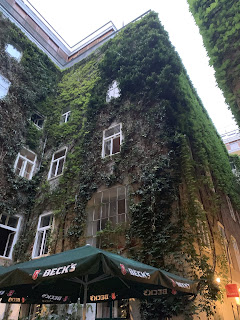 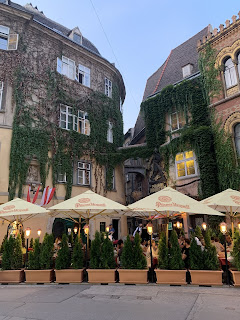 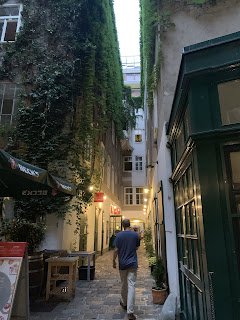 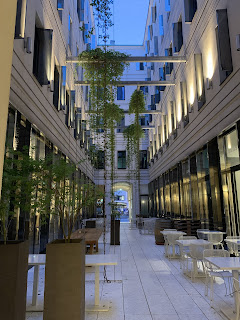 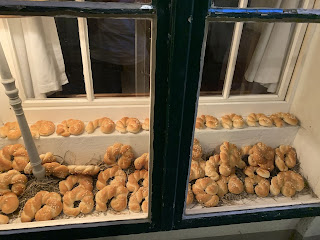 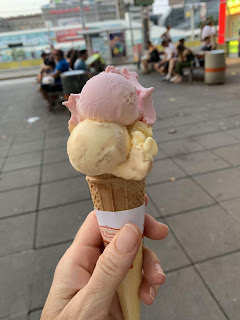 Popular posts from this blog

September 05, 2019
An update is long overdue, but it’s taken awhile to get my feet on solid ground—to find a balance between the feeling that we’re-only-here-for-a-year-and-I-must-not-waste-any-time and the sense that if I give in to that, I’ll make myself crazy with either guilt or exhaustion or both.

Life is different here, but it’s also exactly the same. The differences?

There are small ones like the fact that the toilet is in its own little room with the tiniest sink I have ever seen. The bathroom is across the hall with a bathtub that is lovely and deep, but has no shower curtain. It’s a bit of a splashfest when cleaning up.

The washing machine is next to the tub, but we have no clothes dryer, so laundry has to be considered in advance because there’s no quick-dry option. Most days, I carry the laundry up to the roof (er—more like wrangle a flimsy laundry basket around the creaking stairs) and hang it out to dry on a line that the Gingerbread Man rigged up. We also have large wire racks that will d…
Post a Comment
Read more

September 11, 2019
I’m eating Doritos right at this very minute because last week, my Austrian friend took me shopping. We went to a place called The Snack Shop that sells all kinds of American junk food. I succumbed, but I hadn’t broken into them until today, probably because there’s so much amazing regular food that who needs junk food?

So, yes, I ate Doritos today, but I also listened to parts of Mozart’s The Magic Flute. That must cancel out the Doritos, right? Better yet, I got a library card! Which has absolutely nothing to do with either Doritos or Mozart, but it makes me happy.

Anyway, since the last time I wrote, I have attended a Back to School Night and met all the teachers and got all the forms and signed all the paperwork.


I took the gingerbread boy to Prague last weekend solo because the Gingerbread Man was presenting at a conference in New York. I navigated Prague—there, around, and back. Are you impressed? I am. Especially because my data didn’t work while we were there. And this is me…
Post a Comment
Read more

August 18, 2019
Finding my way to church today involved the tram and bus and a handy little app that showed me the way. The English language ward is chock full of internationals and embassy people. For lunch we had leftover Wiener schnitzel and potato salad, then we took a trip up to see Will’s new school. We were actually able to get in and look around, and it seems nice. Then, as reward for going out in the 93 degree heat, we stopped for gelato: