August 20, 2019
We toured the Vienna State Opera House today. It’s incredibly beautiful, but it was also heartbreaking in a way, because most of it was destroyed during WWII. Here’s the one section that’s original:

In fact, as we travel through the city by tram or bus, it’s clear to me which sections had been bombed during the war, because the newer buildings are plain, flat-fronted, unadorned. It’s something that most Americans have not had to think about, as Pearl Harbor was really the only American setting of destruction. But my heart hurts when I think of so many people suffering. 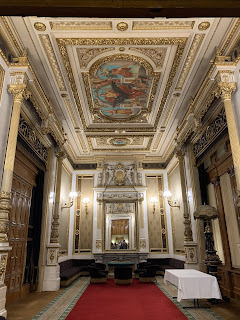 This is the emperor’s special sitting room at the Opera. All the gold is 22 karat. You can rent it for a 20-minute intermission for only 500 euros. 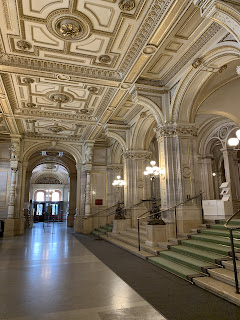 The entrance hall at the Opera House. We toured the backstage as well, which is huge. They employ 300 workers just for the stage and sets. In addition, there is a full orchestra, choir, and ballet. They also give a different show each night, AND you can get standing room tickets for 10 euros. 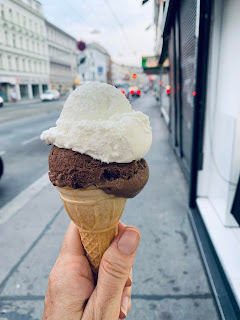 And last, but not least, my daily dose of gelato.

Popular posts from this blog

September 11, 2019
I’m eating Doritos right at this very minute because last week, my Austrian friend took me shopping. We went to a place called The Snack Shop that sells all kinds of American junk food. I succumbed, but I hadn’t broken into them until today, probably because there’s so much amazing regular food that who needs junk food?

So, yes, I ate Doritos today, but I also listened to parts of Mozart’s The Magic Flute. That must cancel out the Doritos, right? Better yet, I got a library card! Which has absolutely nothing to do with either Doritos or Mozart, but it makes me happy.

Anyway, since the last time I wrote, I have attended a Back to School Night and met all the teachers and got all the forms and signed all the paperwork.


I took the gingerbread boy to Prague last weekend solo because the Gingerbread Man was presenting at a conference in New York. I navigated Prague—there, around, and back. Are you impressed? I am. Especially because my data didn’t work while we were there. And this is me…
Post a Comment
Read more

September 05, 2019
An update is long overdue, but it’s taken awhile to get my feet on solid ground—to find a balance between the feeling that we’re-only-here-for-a-year-and-I-must-not-waste-any-time and the sense that if I give in to that, I’ll make myself crazy with either guilt or exhaustion or both.

Life is different here, but it’s also exactly the same. The differences?

There are small ones like the fact that the toilet is in its own little room with the tiniest sink I have ever seen. The bathroom is across the hall with a bathtub that is lovely and deep, but has no shower curtain. It’s a bit of a splashfest when cleaning up.

The washing machine is next to the tub, but we have no clothes dryer, so laundry has to be considered in advance because there’s no quick-dry option. Most days, I carry the laundry up to the roof (er—more like wrangle a flimsy laundry basket around the creaking stairs) and hang it out to dry on a line that the Gingerbread Man rigged up. We also have large wire racks that will d…
Post a Comment
Read more

August 18, 2019
Finding my way to church today involved the tram and bus and a handy little app that showed me the way. The English language ward is chock full of internationals and embassy people. For lunch we had leftover Wiener schnitzel and potato salad, then we took a trip up to see Will’s new school. We were actually able to get in and look around, and it seems nice. Then, as reward for going out in the 93 degree heat, we stopped for gelato: